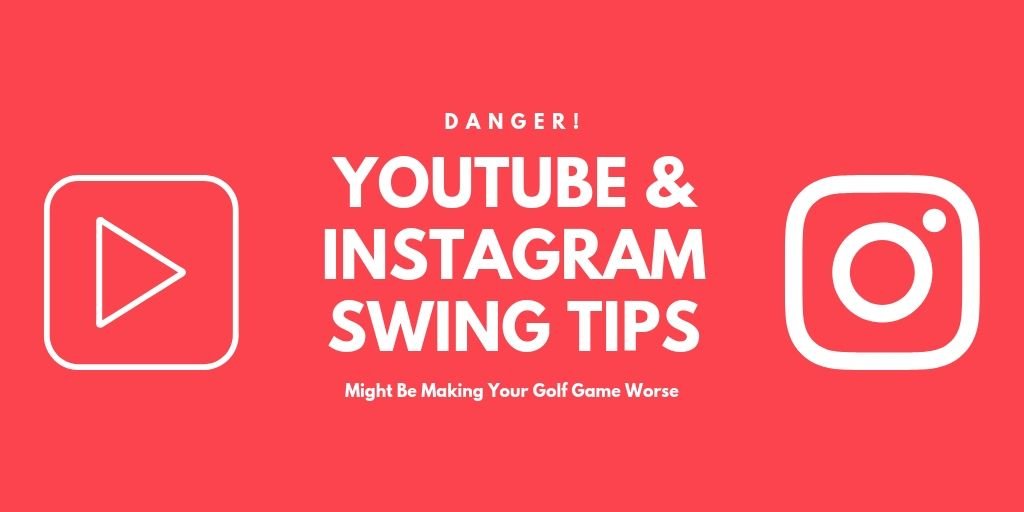 A couple of months ago, I was talking with a friend who is a teaching pro. One of his students, who he has been giving lessons to for months, came in the pro shop. The golfer pulled out his phone and showed my buddy a few Instagram accounts he was following. He asked if he should recreate the swing moves the online instructors were suggesting. My friend politely suggested that he should stick with the things they had been working on, which were specific to his swing.

That exchange encapsulates two significant issues I see with the explosion of golf swing content available – relevancy and continuity, which I will explore in this article. David Poulton summarized it nicely in his article,

Years ago when teaching I would be educating and informing most golfers. Now I find I’m spending more time ‘cleansing’ golfers of irrelevant info or stuff they’ve picked up which has no bearing on them actually swinging the club.

When it comes to the golf swing, there is only so much information a player can consume before it becomes detrimental. For those who seek help from online properties like YouTube and Instagram, there are no limits to the number of swing tips available. Despite teachers’ best intentions, golfers are falling into a dangerous trap when they search for advice. It’s simply too much, too fast.

Compared to most of my articles, this one will be a bit more controversial, but I feel this is an important message.

It’s Not the Teachers’ Fault

Over the past four years, I’ve befriended many golf professionals. I’ve learned a lot about the inner workings of the golf industry, and how the business works. I never really understood how difficult their jobs were until I started this site.

For the most part, golf professionals are all on their own. Despite being “employed” by courses, they are operating their businesses. Most of them don’t receive any compensation during the offseason, and sometimes they need to get creative to support themselves. Since the footprint of golf courses is not increasing, it’s harder than ever to make a living as a swing instructor.

About a decade ago (and even earlier), a small group of teachers saw the growth of the online world, and how golfers were turning to YouTube, websites, and social media for advice. Like any growth curve, there were the innovators and early adopters.

They invested a lot of time and money, creating content and growing their following. It certainly wasn’t easy, but there was not nearly as much competition as there is today. They had a considerable head start and were able to create massive audiences.

Years later, a select few have built up businesses that generate revenue from golfers all over the world. They no longer have to worry about if their lesson book is full – their online audience has made their careers bulletproof. Between online lessons, digital products, teaching seminars, and plenty of other revenue sources, they’re doing very well financially.

Others took notice and did the same. You can call them the early majority. While it was more competitive, there was still a chance to build a nice niche for yourself. Word was spreading, and people like myself would tell instructors that they needed to get on board, or else they were risking on missing out.

Fast forward to 2019. While I don’t know for sure, I think we are somewhere around the late majority or laggards. All of the teaching pros who ignored the earlier advice are rushing to create websites, Instagram accounts, and YouTube Channels. All you have to do is spend a little bit of time on each platform, and you can see there is an endless sea of content about the golf swing.

Here’s the thing. It’s not the teaching professionals’ fault; I don’t blame anyone for trying to protect their career. But for golfers, it creates a potentially dangerous situation.

Designed To Keep You There, and Show You More

The engineers who create platforms like Instagram and YouTube are incredibly talented. Earlier in my career, I worked at Google and was astounded by how smart these people were. It’s the best of the best.

All of these mediums have one goal – to keep you on their website or app as long as possible. That’s how they generate revenue. While I don’t want to get into the dark side of social media and its impact on society, they’ve adjusted and tweaked their algorithms to exploit how our brains work. When the video ends, they’ve got another queued up that is relevant for you based on your usage history. If you have five accounts that you interact with the most, they’re going to recommend ten more that have similar content.

Therein lies the problem for golfers. When it comes to the golf swing, I truly believe less is more, which is the opposite of what is happening. There is no chance for you to make any meaningful changes to your golf swing if you’ve viewed 15 different videos from instructors who all have different philosophies on how to swing a club. The information is endless, and it’s being served up to golfers at light speed.

If you took one golfer’s swing and showed video of it to ten qualified swing instructors, you would likely get ten different explanations of how to fix their flaws. Interestingly, all of them could potentially help the golfer improve, but only if a couple of conditions were met.

First, the explanation from the instructor should resonate with the golfer. They need to understand the style of communication in a way that makes sense and motivates them. Secondly, the player would need to stick with that one instructor’s voice as they continued to work. If they listened to all of the instructors at once, they would be worse off than when they started. You can’t make successful changes with too many voices floating around in your head.

This theoretical example illustrates the two key issues I see with platforms like YouTube and Instagram  – relevancy and continuity. If you want to improve your golf swing, these two concepts are crucial.

How Do You Know What’s Relevant To Your Golf Swing?

When you type in “golf swing tips” on YouTube, you are spinning a roulette wheel. The only difference is there are far more possibilities than 38 outcomes – it’s thousands.

You’ll be served up all kinds of videos from various instructors. They all have different styles and ideas. How do you know you’re going to land on the voice that is relevant to you? Will they communicate in a way that makes sense to you? Or will their explanation of the golf swing confuse you?

More importantly, will their advice match up with what issues you have in your swing?

While there is plenty of useful information out there, the issue becomes what is relevant to your golf swing because there are so many different options.

That’s not to say you can’t find someone who can help you. But the odds are against you because of another issue, continuity.

Continuity Is Key, but Everything Is Stacked Against You

Continuity is a problem that exists at every level of golf when it comes to swing instruction. Because this game is so difficult, and your performance can be so erratic on a day to day basis, our instincts can be to jump ship quickly. Even the best players in the world are known to cycle through swing instructors rapidly when they don’t see immediate results.

In my opinion, if you want to give yourself the best chance of making meaningful changes to your golf swing, you need to stick with the same voice/philosophy for a while and allow it to work. I don’t know precisely how long that period is. Nobody does – that’s the challenge.

Online platforms are designed to do the exact opposite. They want to show you as much as possible to get you to stick around. All it takes is about 30 minutes, and you can consume quite a bit of conflicting information on the swing.

Some of it is excellent. I’ve found many great teachers giving quality advice over the years. Conversely, I’ve seen plenty of mediocre content provided by those who don’t have much expertise or lack the communication skills to deliver their information well on video (which is quite challenging). Many times, the everyday golfer won’t know the difference between the two.

Because different instructors are only one click away, and many of them are thrust on you by recommendations, continuity becomes one of the main problems.

One week, a golfer will fall in love with one YouTube channel and find success in implementing some of its advice. A week later, the novelty wears off, and they start having difficulty with their swing again. It’s quite easy to abandon the information and move on to the next account. Or, they are trying different tips from multiple instructors at the same time. Yikes!

Because there are thousands and thousands of teachers available, the temptation to keep going becomes almost impossible to resist.

So What Should You Do?

I know a lot of this article has been negative, which is a departure from the way I usually communicate on Practical Golf. To be clear, I am not against the instructors. I’m friendly with many of the popular accounts you have come across, and have learned a lot from them myself. My issue is more with how the information is distributed and consumed, which is beyond their control.

While I don’t have all of the answers, here are a few suggestions that I believe will give you a better chance:

Online golf advice is imperfect. I’ll admit this website has its limitations because I can’t possibly give customized information to all of the golfers who read my articles.

When it comes to the golf swing, things get even more complicated. Each web property wants to keep you on their turf for as long as possible. It’s almost like spending more time at a casino – the longer you stay, the bigger the chances are that you’ll lose.

I realize many of you will disagree with what I’ve written. Like everything else on this site, these are one guy’s opinions. I can assure you I have all of your best intentions at heart; there is no hidden agenda here. Feel free to continue the conversation in the comments section.

All Credit for blog to https://practical-golf.com

Miss Something? Ask away!

Thank you! Your submission has been received!
Oops! Something went wrong while submitting the form